TRANSFORMATION OF THE MONTH FEATURING MY ATHLETE SANDRINE! 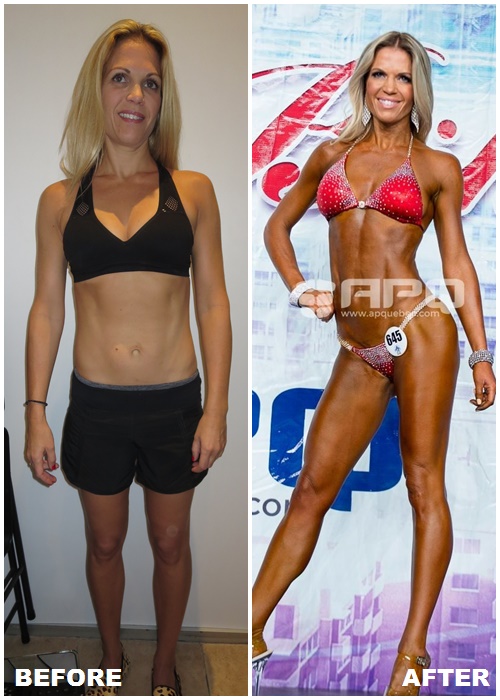 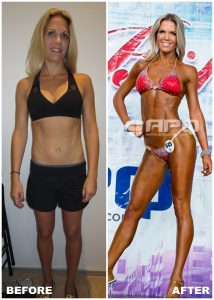 Sandrine came to me about a year ago to get some help with her nutrition as she wasn’t getting results she wanted with her current meal plan.  We completely revamped her meal plan and she started improving.  She then decided to train with me on a weekly basis to improve her lower body which in turn helped her get even better results.  After 4-5 months of working together I suggested that she consider doing a bikini competition but only in a year’s time.  That was too far away of a goal for her to strive for, so I told he if she works hard, we could improve her enough to compete this year.  Sure enough, she did the work, followed my guidance to the tee and the results speak for themselves.  She placed top at both regional and provincial shows and we are now working on getting her ready for the upcoming national championships in May 2017.  Sandrine works full time, is married with 3 kids and still makes time to reach her fitness goals.  She is a great example for all mothers out there.  Amazing work Sandrine, very proud of you!

When I first met Chris I was in “good shape”, but I wanted to build more muscle. I worked out 6 days a week and didn’t understand why my body was not changing.  When I met Chris for my initial consultation I told him I was a vegetarian he closed his laptop and told me this was not going to work, if I want to build more muscle I needed to eat more protein and therefore needed to eat meat. At first I agreed to eat fish, only white fish. I was dreading each meal. I was about to quit, but before I did a friend convinced me to try chicken which I was able to eat. The other thing Chris told me when I first met him was to do more weights and to limit my cardio to one day per week. WHAT???? “I’m going to get fat” was the first thing that came to mind. “Trust me!” is what Chris told me. As the weeks went by and the body assessments were done I saw that my body was changing, I was slowly gaining more muscle mass and losing fat.

One day in his office Chris mentions that I should consider doing a bikini competition as he felt I had developed well enough to be competitive in such an event. WHAT??? I told him he was crazy.  After thinking about it I thought it would be a good training goal and personal challenge to have for the 2017 season.  However, about 6 weeks before the Mike Clement Competition in May 2016, Chris said that I had improved significantly and that I should compete. I told him he was crazy again and he once again said “Trust me!”. So I did.

Thank you Chris….in the last year not only have I changed my body, but I have challenged myself and have become stronger both physically and emotionally.